What is your SQ ? 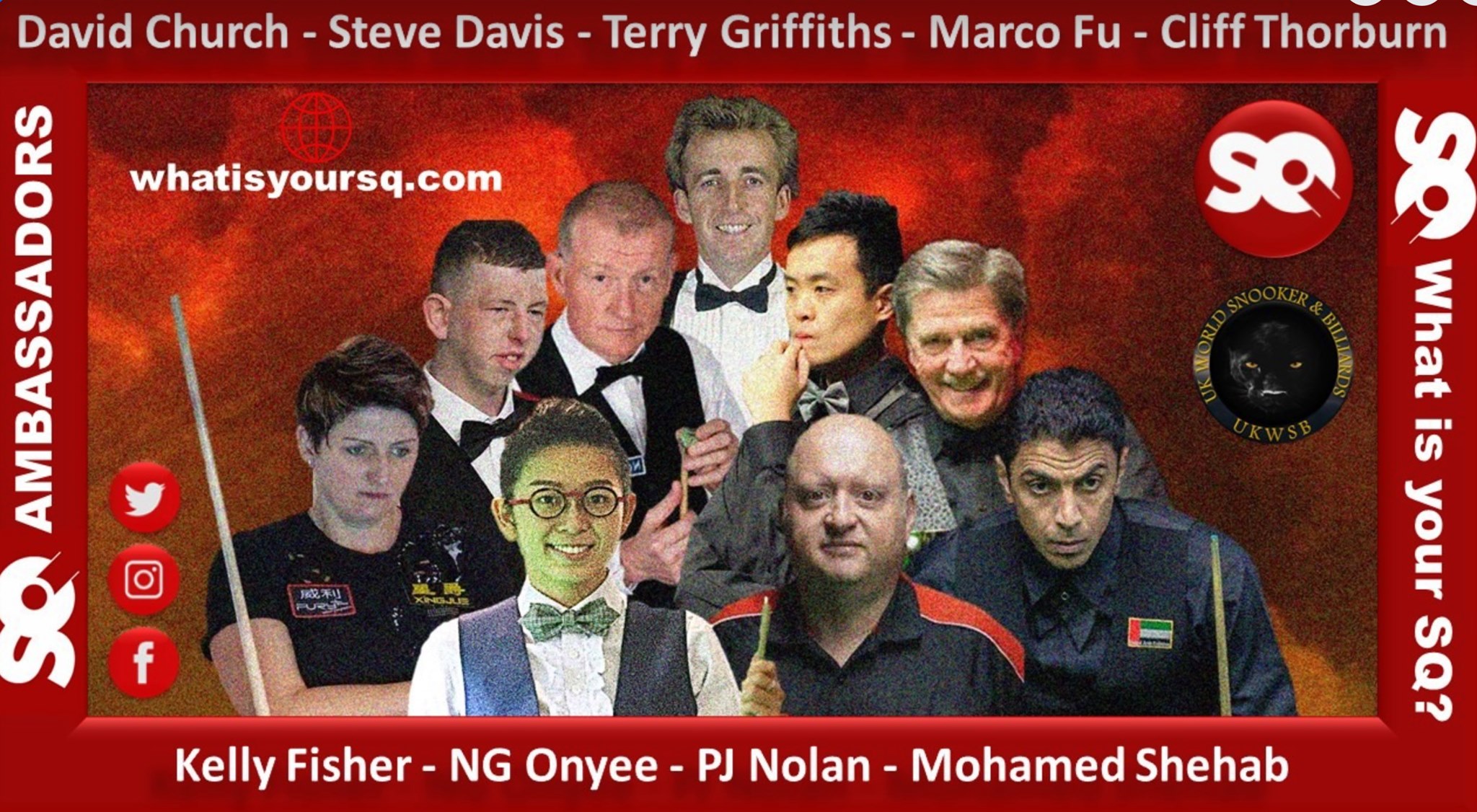 This week I am honoured to be named as an ambassador of the Snooker Quotient (SQ) which was launched officially on the 28th of April.

This project by Terry Griffiths (in Wales) and Wayne Griffiths (in Hong Kong) is designed to allow all players to train locally, compare and compete globally through the system.

It is a huge honour to be linked beside some legends of the sport in Terry Griffiths, Steve Davis, Cliff Thorburn, Marco Fu, NG Onyee, Kelly Fisher, Mohammed Shehab and David Church.

I would encourage all players to check out this app and web site to find out more information on this project and What is your SQ?

Web Site Link: What is Your SQ? The Snooker Quotient (SQ) started as an idea to objectively assess players in an elite training environment. However, following on from the success it generated, it was recognized that it could also offer snooker players, at any level of ability, a global, relative assessment system similar to the handicap system that golfers have enjoyed for more than a century. With tried and tested data collected by Terry Griffiths (in Wales) and Wayne Griffiths (in Hong Kong) over the last 10 years, players will now be able to see, for the first time, what relative standard they are performing skills at and how they can build plans to improve them.

Having a measure of your ability and a way to compare yourselves with others has so many benefits for both coach and player and has been a significant factor in golf’s explosion in popularity. Snooker Quotients (SQs), like a golf handicap, will:

The SQ system will do the same as the golf handicap for snooker, but it will provide more detailed information to offer even more to every player and coach:

With the SQ system, members will now be able to use the SQ global database at whatisyoursq.com to find out interesting facts about the standards from all around the world. For example, members can find out “who is the best female long potter in Asia under the age of 21?”. An up and coming player may want to know at what SQ level they can start to consider themselves as a top amateur or at ‘professional standard’. Parents can take a look at the SQ development curves we will provide (populated with data from over 10 years of testing at elite junior level) and have factual information to help them make life changing decisions, like should we be re-mortgaging the house to build a snooker room for their daughter, or is their son good enough that they may consider pulling him out of school earlier than planned. This sort of information has never been available before. SQs will change that.

Within each ISQ there are 4 practice routines. These routines have been used for the last 10 years to allow us to have data that is factual and accurate. Once you have completed the 4 ISQs (16 routines in total), your SQ will be automatically generated based on your 4 ISQ scores.

SQs will range from 0 – 100, with 100 being a perfect score (an SQ of 100 has never yet been achieved and we don’t think it ever will – we challenge every player out there to prove us wrong). To achieve a perfect SQ of 100 you would need to play mistake free snooker over 16 routines. No player yet has achieved a perfect score in one of the ISQs, let alone in all four of them!

There are 2 levels available for SQ testing. Level 1 is for beginners to early intermediates. Level 2 is for late intermediates to elite. We recommend that every player starts with Level 1 ISQs and only moves to Level 2 when they have achieved an SQ of 50 or more at Level 1. We do give the option for players to go straight to Level 2, but suggest that you do not take this option unless you have a high break of 75 or more. Members will need to complete all 4 ISQs in one of the levels before they get an SQ – at that level. Those members switching from Level 1 to Level 2 will not get a valid Level 2 SQ until all 4 Level 2 ISQs have been completed.

Routines will need to be captured through the SQ app using a phone or tablet and uploaded for verification. The quotient is calculated with a mathematical algorithm based on the scores from each routine.

Detailed descriptions of each routine will be given to members in the app. A photo of the routine set up and a video giving more details and showing the exercise being completed will also be available.

Pressure will be created too, as there are no second chances in the ISQ testing process. Once a test is started, members will have to submit all the routines within a 24-hour period and routines cannot be repeated. ISQs cannot be tested again for at least 7 days, so that players will be encouraged to work on their own or with their coaches to improve before re-testing.

The 16 routines are not meant to be the only work that players have to do to improve. There are a myriad of other methods and routines that a player may have to undertake to see the development they desire. The 16 routines however, do offer a stable and broad set of tests that are used as a yardstick, on an ongoing basis, by which a player’s improvement can be empirically measured.

We will work with coaches to generate more interest in structured training using the SQ system. In a partnership with the WPBSA, SQ coach training will only be provided to WPBSA qualified coaches at first. WPBSA coaches will also get a discounted rate for coach training and free membership for the first year.

The first 1000 SQ members to join whatisyoursq.com will receive a special offer of two free ISQ submissions with their first year’s membership. ISQ submissions will cost around the price of a Starbucks coffee – US$5 (around GBP 4) and annual membership will be approx. GBP18 (USD$25). The SQ methodology has been used by main tour ranking event winners and other professionals, by Ladies’ world champions and by junior world champions. Players will be able to see a number of the top players in the world playing the routines and, for the first time ever, will get an appreciation of what routines elite players use and how well they do in them.

Terry Griffiths OBE is now taking an idea he has seen generate significant success, and making the same training concept available to every player and coach in the world.

What is your SQ?