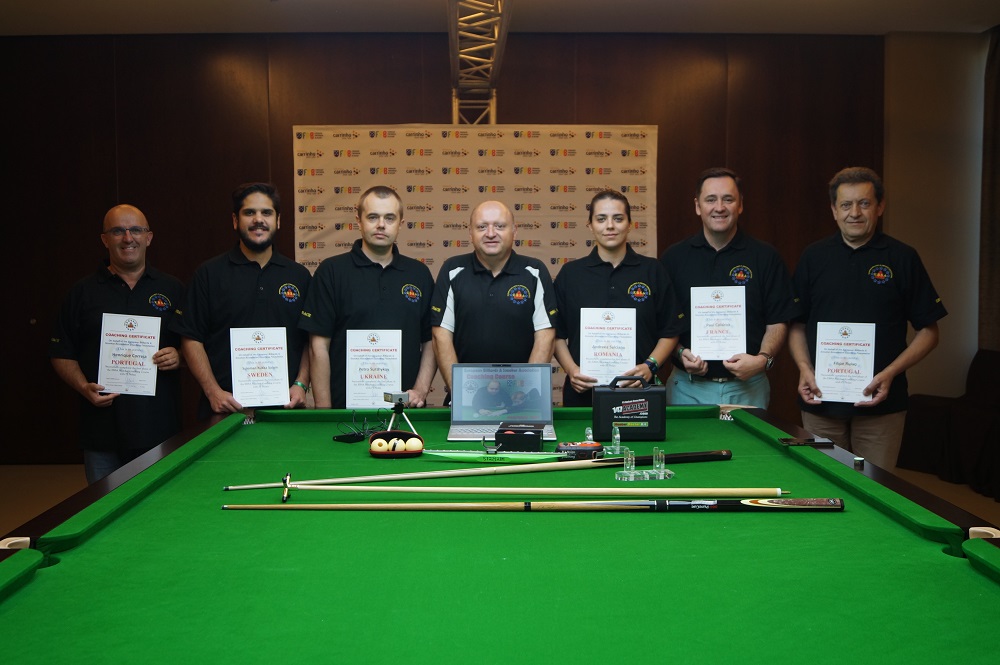 In my role as Head of EBSA Coaching I travelled to Portugal to hold an EBSA Coaching Course during the 2021 European U-18 and U-21 Championships from the 4th– 7th of October on behalf of the European Billiards & Snooker Association to train six Official EBSA Snooker Coaches.

The successful course was held in the incredible Albufeira’s Vidamar Hotel Resort in the Algarve for six nominated coaches from France, Romania, Sweden, Portugal and Ukraine.

The EBSA Coaching Course is a four-day intensive training course is only open to recognised coaches who are approved by their own National Governing Body. The six nominated coaches were Andreea Salcianu from Romania, Suleman Kukka Salam from Sweden, Paul Coldrick from France, Filipe Ruivo and Henrique Correia from Portugal and Petro Surzhykov from Ukraine.

’It was great to see the passion in the new coaches this week. Some already have a lot of coaching Experience and he was delighted to have six more EBSA coaches join our EBSA team and help the EBSA grow the game all around Europe.

The coaches also attended a one day WPBSA seminar on Child Protection with WPBSA head of Coaching Chris Lovell. The coaches will now receive equivalent grade to the WPBSA Level 1 Coach so they can begin a pathway to level 2 WPBSA Coach in the future if they wish.

EBSA Referee Glen Sullivan Bissett held a 1hr rules seminar for the Coaches during the course. He explained some of the rules of the game with scenarios on the table so the coaches can now instruct their players with the information. EBSA would like to thank Glen for doing the seminar.

The EBSA Snooker Coaching syllabus includes a practical exam as well as verbal and written exams covering all the techniques and skills of coaching the game of snooker. This Coaching course covered all aspects of the game from Planning Sessions, Designing Routines, Role of a Coach, Sports Psychology, Rules of the Game, Practice Exercises, Written Records, Safety Play, Shot Selection, Oral Assessment, Preparation for Match- Play, Physical and Mental Etiquette and on the final day they completed the EBSA coaching written exam.

The new coaches will create a training program and manual in their country to help train and guide the players. The coaches will now begin their probation period where they will complete all the necessary assignments to graduate in becoming a fully accredited EBSA Coaches later on this year.

The EBSA will soon have 104 EBSA Coaches from 34 countries with full EBSA accreditation promoting the game all around Europe which goes well for the future of the game all across Europe.

I would like to thank EBSA President Maxime Cassis and EBSA Vice Chairman Ricardo Salgado and The Albufeira’s Vidamar Hotel Resort for their assistance in arranging everything for this course. I would also like to thank Chris Lovell and all the WPBSA Team for holding the 1 day seminar for our coaches.

I wish the new six EBSA coaches the best of luck in developing their coaching skills and completing their homework assignments in graduating as full EBSA Coaches later this year.