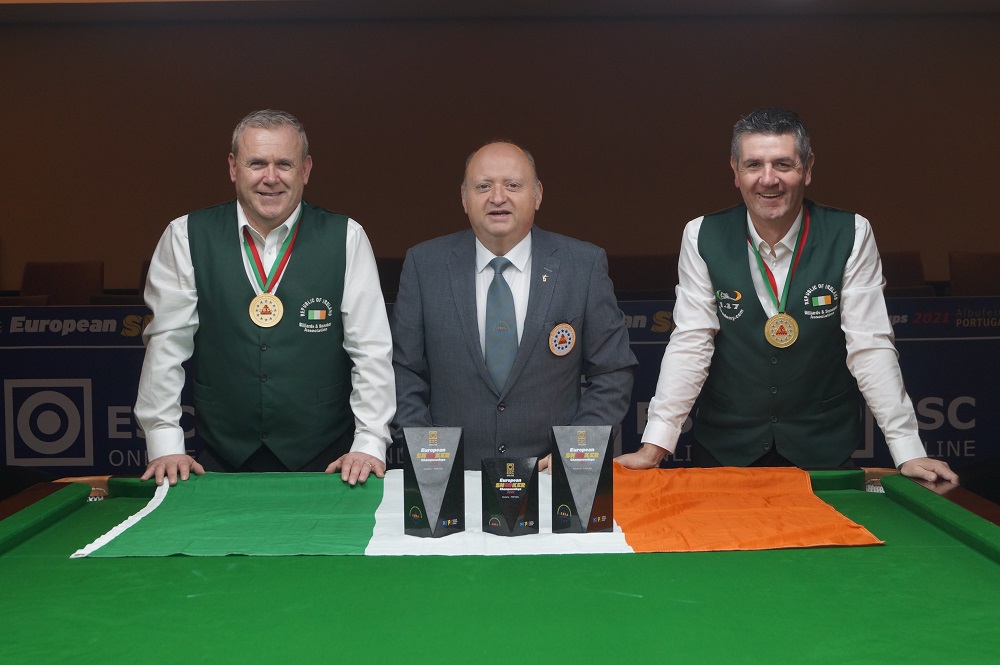 Last week I had the great honour to coach and manage the Ireland National Snooker players and teams in the 2021 EBSA European Snooker Championships at the beautiful Albufeira’s Vidamar Hotel Resort in the Algarve in Portugal.

Snooker & Billiards Ireland sent a total of 16 players to compete in the Under 18, Under 21, Men’s Singles, Seniors Singles, Men’s Teams and Senior Team European Championships this year.

The Irish players/ teams were:

The Irish Junior star of the Championships was Alex Currid from Wexford when he reached the Q-Final of the Under 18 Championships. All players gave it everything and the experience will stand to each of them in their overall development. I was very proud of each player in both Junior championships this year.

The lack of competitions in Ireland for the past 18 months due to covid-19 was always going to be hard for our Men’s players and teams this year, each player gave it all they had and prepared for each match/session with a great commitment. All men lost in the last 64 of the singles and both teams lost in the last 16 of the team’s event to Poland and Latvia.

The Irish seniors stole the show this year at the Europeans with Frank Sarsfield reaching the final of the Seniors Singles championship losing to defending champion Darren Morgan. The senior team of Frank Sarsfield and Mark Tuite then went one step more, when they won the European Seniors Team Championship beating Team Malta 5-3 in the final.

Mark also won the high break prize in the Seniors team event and the win means he has now won 3 European Titles so far in his career. There was even more good news following Frank’s performances in Portugal with WSST World Seniors Snooker Tour awarding frank with a place at the 2022 World seniors in the Crucible theatre in Sheffield against the legends of the game.

Mark and Frank had beaten Irish team mates Dylan Rees and John O Sullivan in the Q-Final of the team event while Mark Tuite reached the last 16, John O Sullivan reached last 32 losing to Frank and frank went on to reach the final in the singles Championships.

Overall it was an incredible event with 9 separate European Champions crowned in just 18days. The schedule was hard on the players, referees and officials in the event, but everyone will look back with beautiful memories from the 2021 EBSA European Championships.

Finally, I would like to all the players for representing our country with pride as National Coach I was proud of everyone. I would like to congratulate Frank on becoming only the 5 Irish player to reach the final of the Europeans Seniors and to Frank and Mark on winning the Seniors team title in style.

Thank you to Snooker & Billiards Ireland for sending me with the players to this event and to EBSA European Billiards & Snooker Association for hosting such a brilliant event again this year.