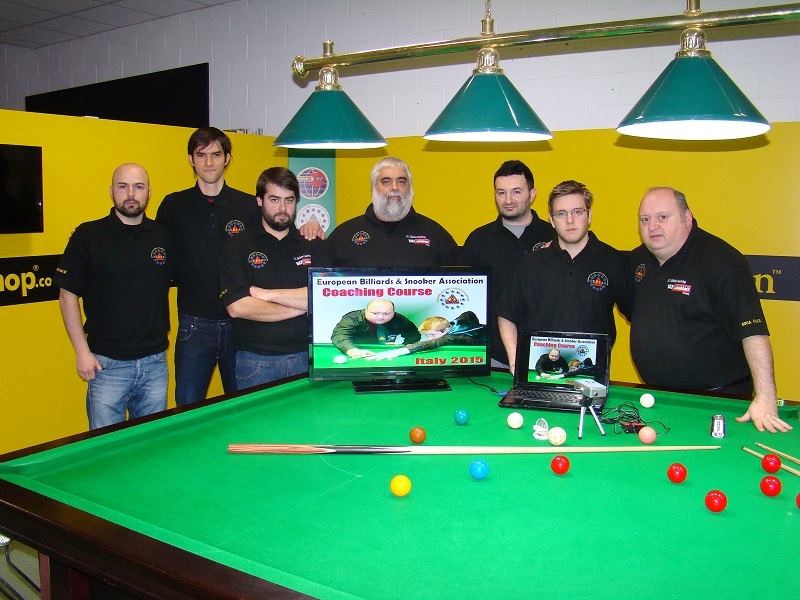 This week as head of EBSA Coaching I travelled to Milan in Italy to train six coaches on behalf of the European Billiards & Snooker Association in becoming Official EBSA Snooker Coaches. This EBSA Coaching Course is only open to recognised coaches who are approved by their own National Governing Body. The Italian Federation Sport Billiard (F.I.B.I.S.) had nominated Davide Coltro, Claudio Costa, Massimiliano Sabetta, Francesco Bertaiola, Michele Battaglia, Michele Monaco to attend this training course which was held in the beautiful Ambrosian Snooker Academy in Milan.

The EBSA Snooker Coaching syllabus includes a practical exam as well as verbal and written exams covering all the techniques and skills of coaching the game of snooker. This Coaching course in Milan covered all aspects of the game from Planning Sessions, Designing Routines, Role of a Coach, Sports Psychology, Rules of the Game, Practice Exercises, Written Records, Safety Play, Shot Selection, Oral Assessment, Preparation for Match- Play, Physical and Mental Etiquette and on the final day the coaches completed the EBSA coaching written exam.

During the course we designed and developed a new Italian training program to help the new coaches’ train and guide their players. The coaches will now begin their probation period where they will complete all the necessary assignments in Italy to graduate in becoming a fully accredited EBSA Coaches. The EBSA will soon have thirty two coaches from twelve countries with full EBSA accreditation promoting the game all around Europe which goes well for the future of the game. During the course the snooker president Davide Coltro arranged a dinner party for all their members to highlight the importance of this EBSA course for Italian Snooker and he made a special presentation to me on the night to mark the occasion.

Maurizio Cavalli head commentator of cue sports on Italian Eurosport also spoke to me on how popular Snooker is getting in Italy and how he hopes a PTC World Snooker event might happen in the future. He was delighted to see this course and he hopes it raises the standard of the game in Italy.

It was fantastic to train the Italian coaches and see how passionate they were about the game and how much they wanted to learn. In Davide Coltro they have a man obsessed with developing Snooker all around Italy and having a team of qualified Italian coaches will help to help promote the game in Italy and help produce top class players in the future. I would like to thank Davide Coltro for organising everything and the Italian Federation Sport Billiard (F.I.B.I.S.) for inviting me to do the course. I wished the six new EBSA coaches the best of luck and it was a pleasure doing the course as the city of Milan was so amazing.

If you would like to become an Official EBSA Coach you need to contact your own National Governing Body in writing and request them to officially contact Maxime Cassis in the EBSA nominating you to do the course. Full details are on www.ebsa.tv web site. 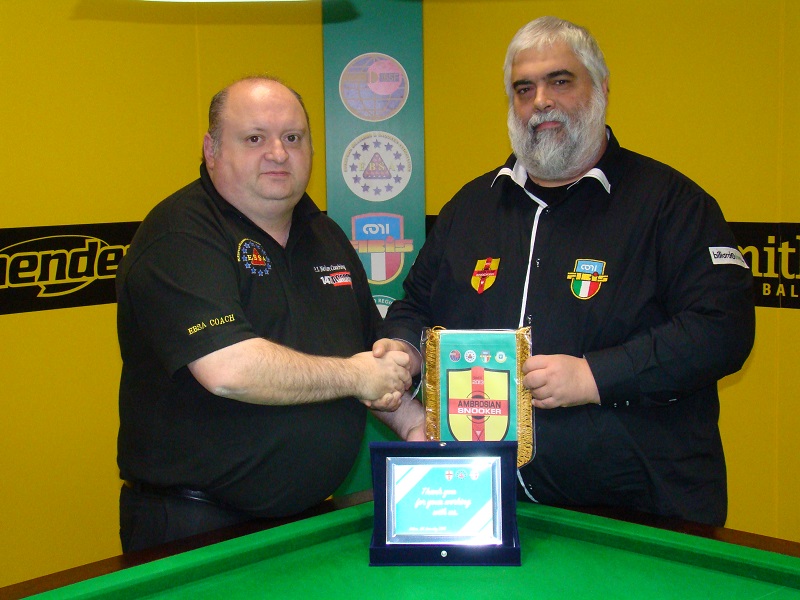