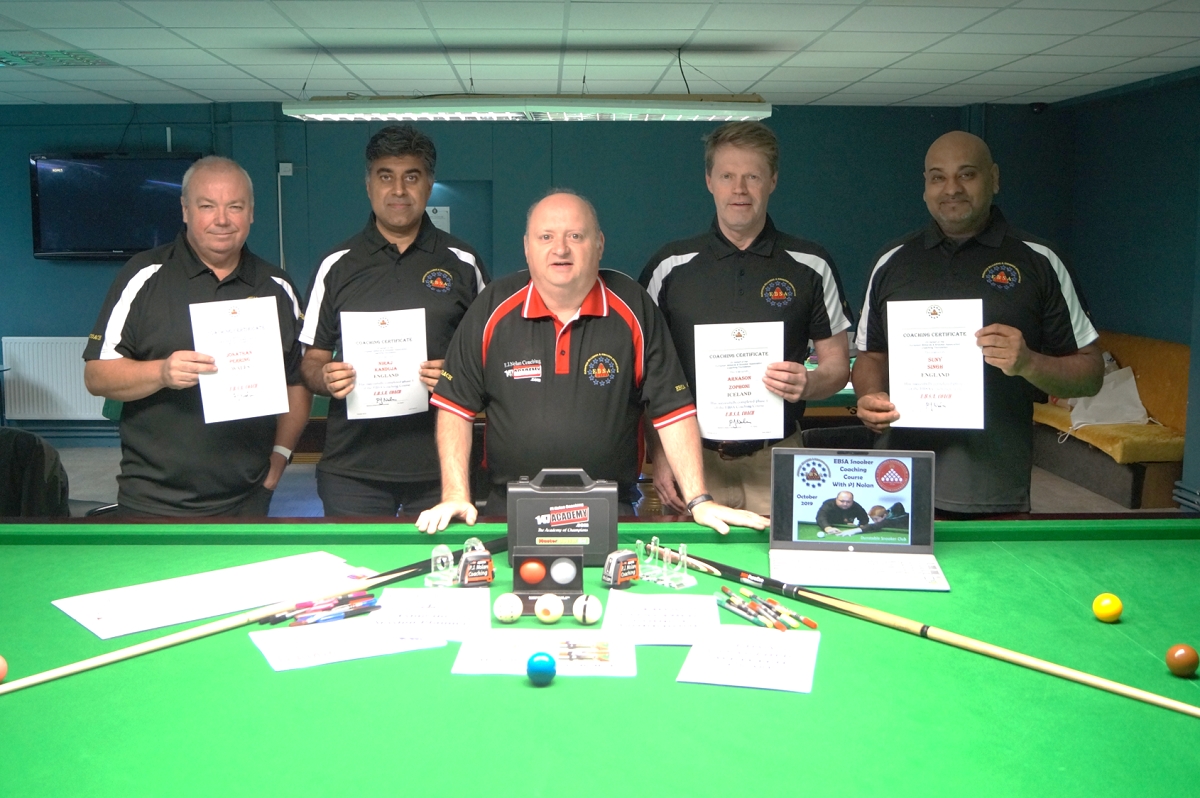 As Head of EBSA Coaching I held an EBSA Coaching Course from the 22nd – 24th of October to train four coaches on behalf of the European Billiards & Snooker Association in becoming Official EBSA Snooker Coaches in Dunstable, England.

The Course was held in the amazing Dunstable Snooker Club near Luton in England. The club contains 7 Star Professional Snooker Tables and 9 Professional 8 Ball English Pool Tables. This is the perfect training base for any cue sports player in preparing for upcoming events.

First EBSA Course in the UK

The EBSA Coaching Course is only open to recognised coaches who are approved by their own National Governing Body. This successful course was the first of its kind held in the UK and attending this course was Jonathan Perring from Wales, Suny Singh and Neeraj Khanduja from England and Arnason Zophoni from Iceland.

Jonathan Perring is already an experienced Welsh Coach, Suny Singh is the owner of Dunstable SC who has an incredible passion for the game, Neeraj Khanduja is already a level 1 WPBSA Coach and Arnason Zophoni is heavily involved in the Snooker in Schools project in Iceland with fellow EBSA Coach Palmi Einarsson. 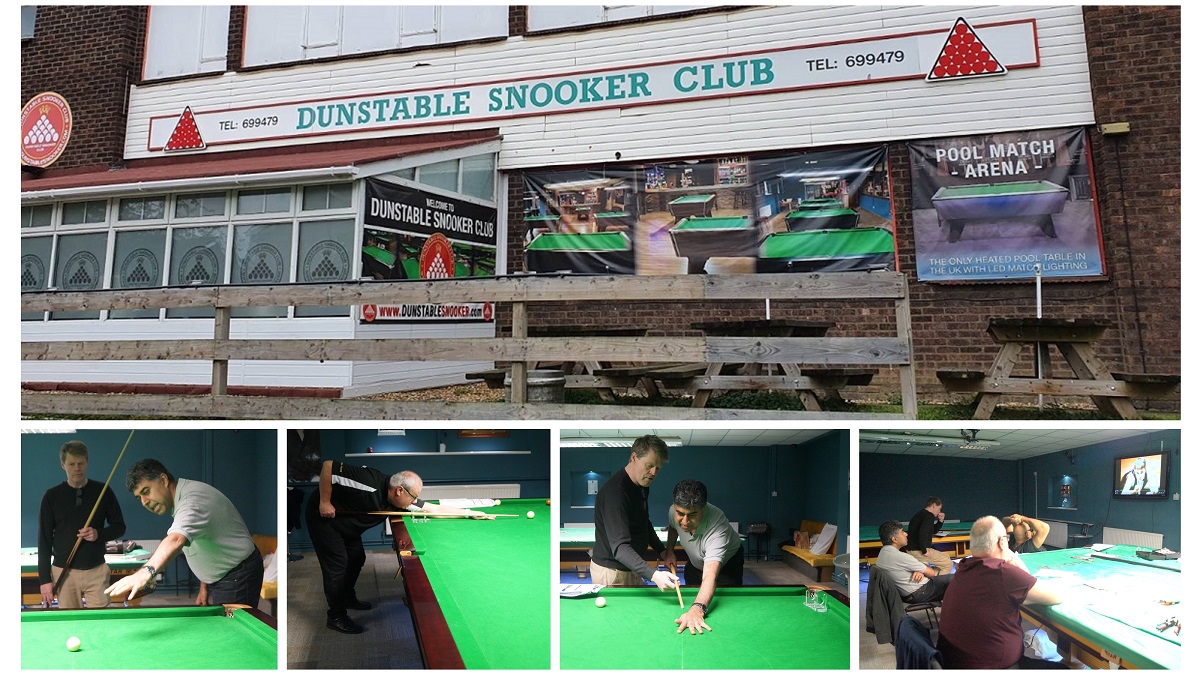 EBSA Chairman Maxime Casis said ‘’ It is fantastic to have this Course in the Dunstable Snooker Club in England to qualify four more EBSA coaches and strengthen our structure within Europe. After the three days of intensive training from our Head of EBSA Coaching PJ Nolan I am sure our new coaches are on the right pathway to help their National Association developing the game in their countries.

The EBSA have now twenty-eight countries consisting of seventy-nine coaches with full EBSA accreditation promoting the game all around Europe which goes well for the future of the game. 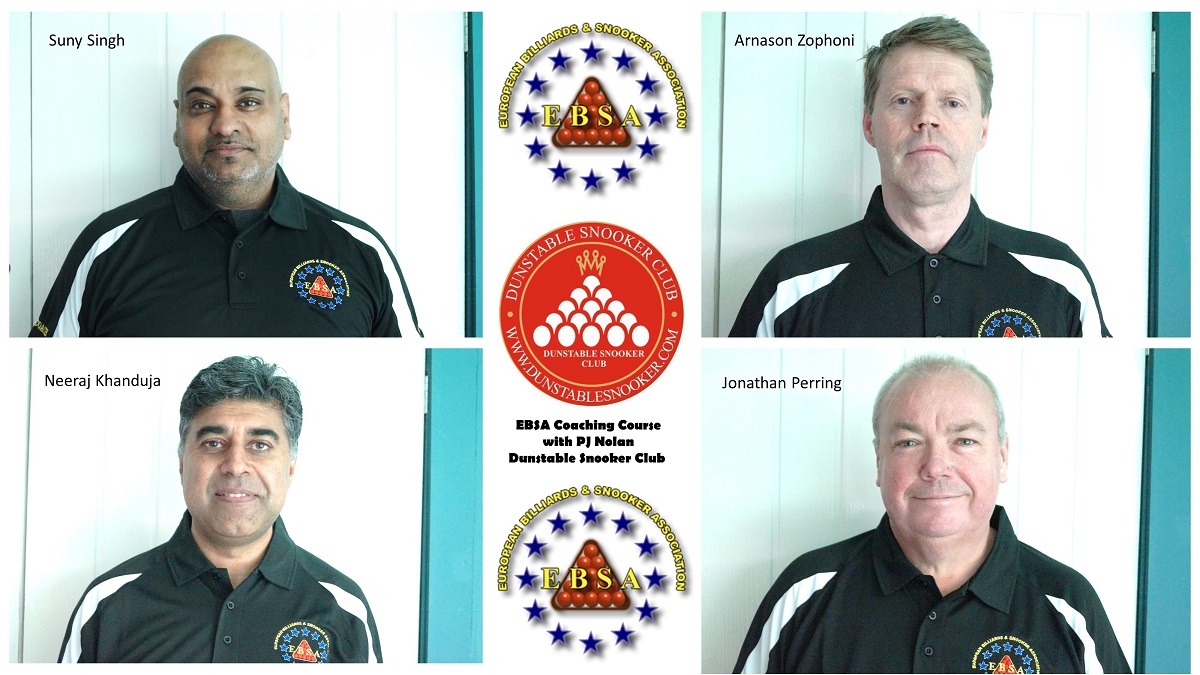 A new training program and manual in English and Icelandic language will be developed to help the new coaches to train and guide their players in their countries. The new coaches will now begin their probation period where they will complete all the necessary assignments to graduate in becoming a fully accredited EBSA Coach later on this year.

The EBSA Snooker Coaching syllabus includes a practical exam as well as verbal and written exams covering all the techniques and skills of coaching the game of snooker. 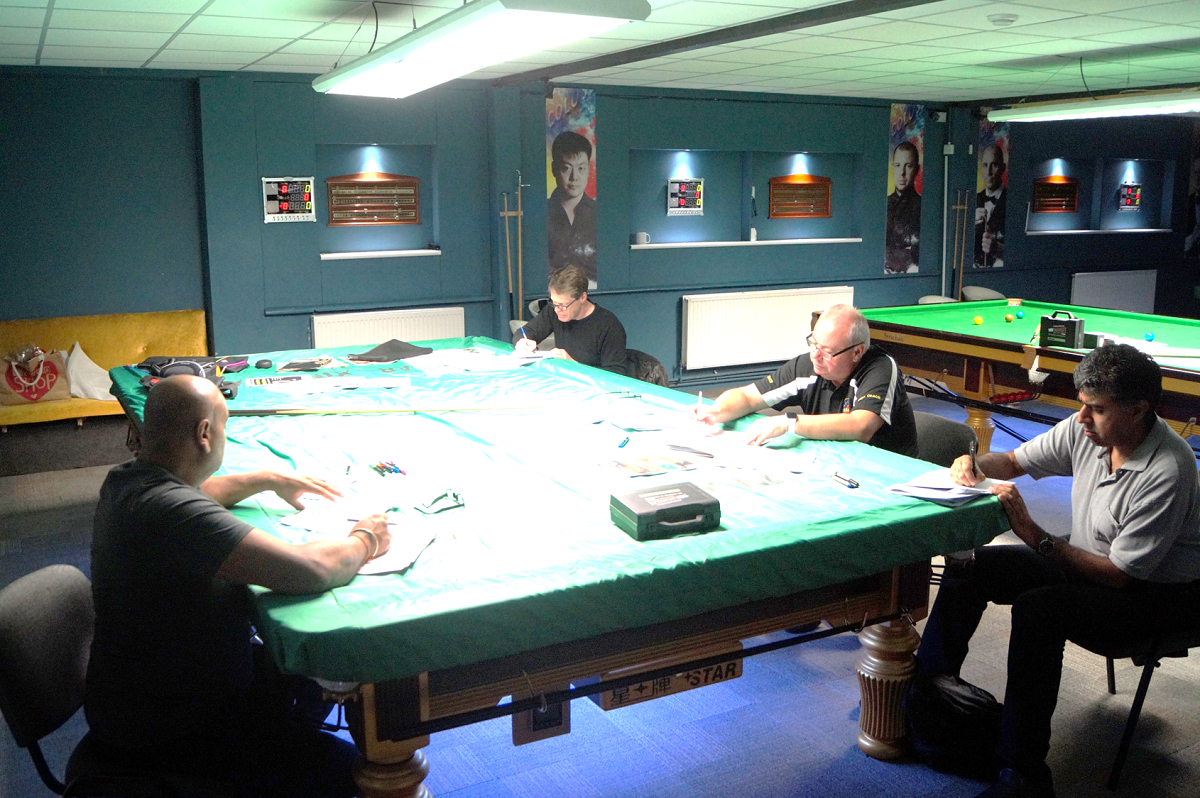 Earlier in 2019 the World Professional Billiards and Snooker Association (WPBSA) Jason Ferguson and European Billiards & Snooker Association (EBSA) Maxime Cassis announced a partnership which will see our EBSA Coaches having the opportunity to achieve Level 1 WPBSA World Snooker Coach status if they attend a Chris Lovell WPBSA Course which includes Safeguarding Child Protection at a European Championships for free of charge.

I would like to thank Dunstable Snooker Club for doing everything in making the course a big success. Suny Singh looked after us all so good in making it an enjoyable experience. I also thanK EBSA Chairman Maxime Cassis on arranging the course and be the first of its kind in the UK.

Finally, I would like to wish the four new EBSA coaches the best of luck in developing their coaching skills and completing their homework assignments in graduating as full EBSA Coaches. 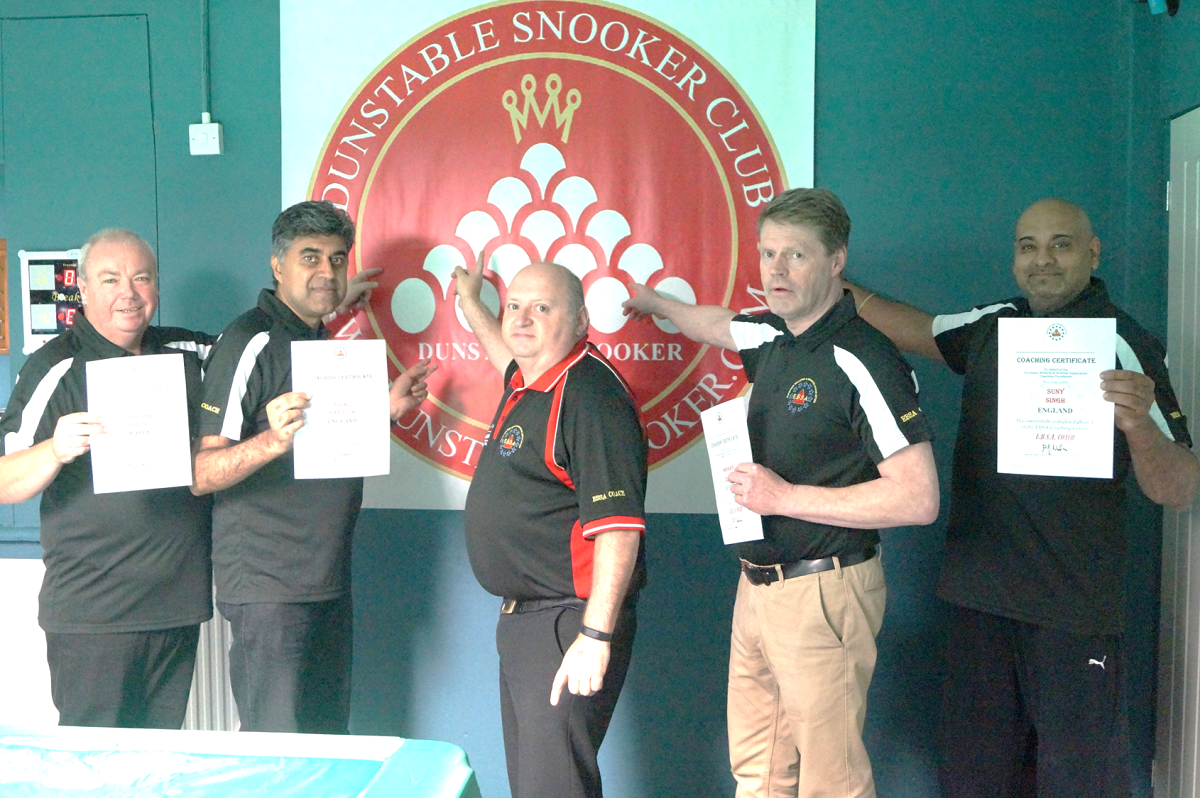 Another EBSA Coaching Course will be held at the next European U-18, U-21 and Men’s Championships in Portugal. This will allow any NGB Coach to be trained in becoming an EBSA Coach plus attend a WPBSA World Snooker Coach Couse on the final day to get Level 1 accreditation.

If you would like to become an Official EBSA Coach you need to contact your own National Governing Body in writing and request them to officially contact Maxime Cassis in the EBSA to nominate you to do the course as only nominated NGB coaches can attend the EBSA course.

Full details will be posted on the EBSA web site soon.