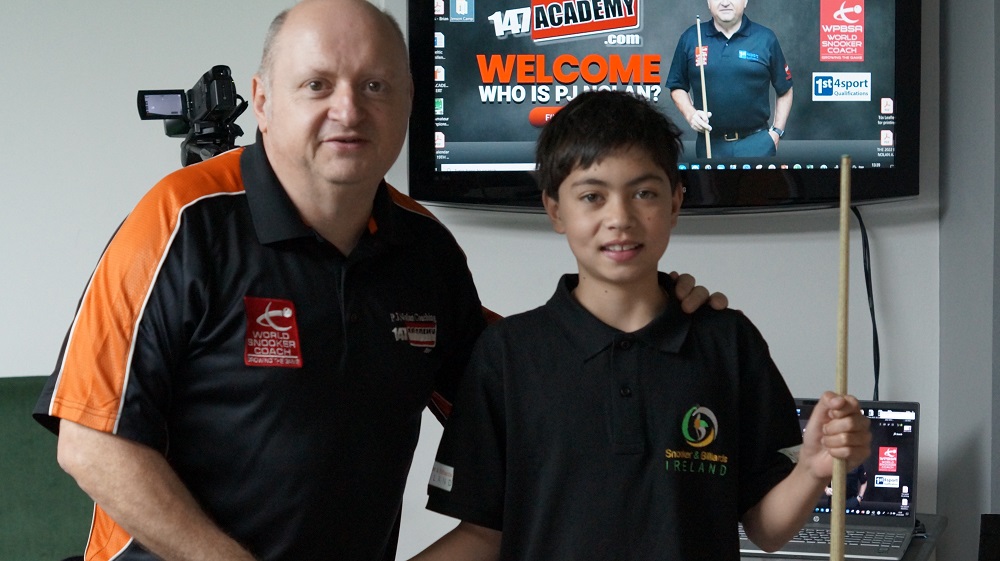 This week my 147academy had the pleasure of coaching a 12-year-old star of the future Jenson Schmid from Switzerland in the new SBI Academy of Excellence in Carlow, Ireland.

Jenson travelled with his father Patrik to improve his game ahead of the 2022 U-16 & U-18 EBSA European Snooker Championships which will be in held in Albania in June.

In Switzerland, Jenson is coached by Swiss National Coach Urs Freitag and i was impressed by this 12year old talented player in every session. His potting was incredible and work rate and passion to learn all the shots, drills and technical information. It was an honour to coach him during this camp.

Star of the future

I believe Jenson has the potential to become one of the top European juniors in the next few years and follow in the footsteps of current professional Switzerland player Alexander Ursenbacher in representing his country with pride at many major events in the future.

The latest training aids were used in this camp to enhance each session like the Blade Cue, Master Doctor, Str8aim SA-1 & SA-2, Chris Henry Balls, Academy laser, EBSA Coaching Balls to help to get him on the line of aim and develop a smoother stroke in his delivery.

Watch a video of Jenson Training at the Camp

Jenson was videoed during each session and he brings home all the videos of the action from the sessions to study and analyse more on the routines in his new training program with specific Warm Up’s, Technique, Aiming, Control and Scoring training drills.

Patrik “said it is fantastic to come to Ireland for coaching camp with PJ. The SBI Academy in Ireland is world class and the structure of the camp was perfect every day for Jenson. I really feel Jenson’s game really improved in the four days with the all the technical fundamentals, break building skills and shot selection advice. Jenson says he cannot wait to return again for another camp.

During all the sessions I worked on fine tuning his fundamentals in his technique by working on his Approach, Grip, Delivery and Rest Shots. We also talked about his shot selection and cue ball control plus about the mental side on becoming mentally stronger.

Jenson now begins a new training program which will be monitored with the feedback from his practice sessions in Switzerland. It is fantastic to have another top European Junior in my 147academy and I will do everything possible to help develop his game over the next few years.

My 147academy would like to thank Jenson and his father Patrik for coming to Carlow and I wish him good luck for the future. I look forward to seeing him play in the EBSA Championships in Albania.