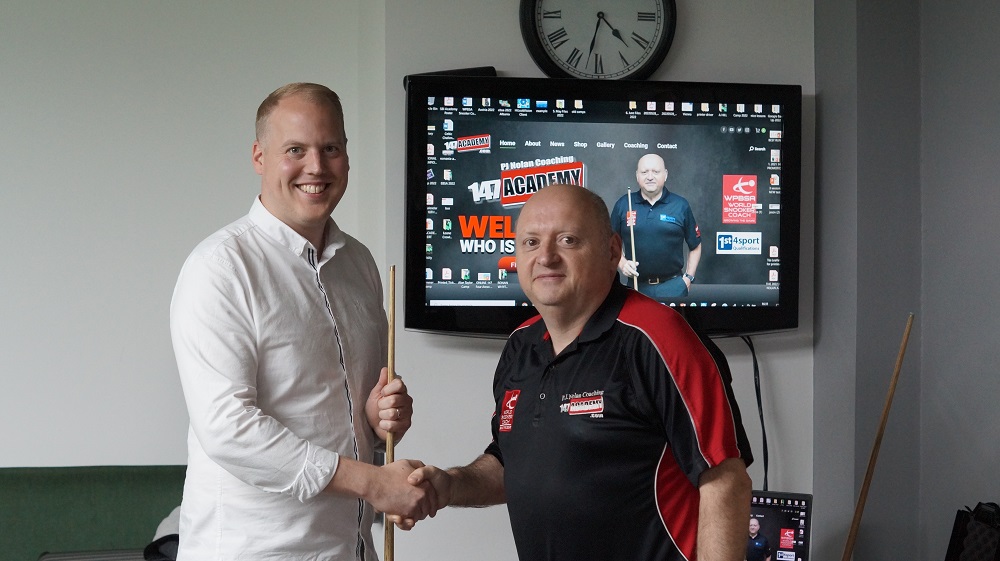 On the 2nd of June 2022, My 147academy had the pleasure of coaching and training current snooker professional player Allan Taylor from England in the new Snooker & Billiards Ireland HQ in Carlow in the Republic of Ireland.

Allan has spent many years including the last two years on the Professional main tour playing against the world’s best which he qualified through QSchool. He had a very famous win over Ricky Walden in this year’s World Championships to retain his pro ticket.

Allan was just started his preparation for the 2022-2023 WST season which will start in the UK next month. Allan is hoping to continue his fine form after a great end of season for this upcoming pro season.

The latest training aids were used in this camp to enhance each session like the Master Doctor, Str8aim G-5 & SA-2, Chris Henry Balls, EBSA Coaching Balls to help to get him on the line of aim and develop a smoother stroke in his delivery.

Allan was very impressed with the facilities in the new SBI HQ in Carlow and said it was brilliant finally to have the session with PJ and he hopes to return later in the season for a follow up session.

Allan now returns to the UK with all the movies from his training session along with a specific training program that hopefully help him with his training. My 147academy wish him all the success this coming season and it was an honour to have him over for the coaching session.